"Ukraine will have its first victories in August": intel chief Budanov on situation at front, Belarus threat, end of war
4719

Ukraine may get fighters and tanks from Slovakia
Editors' Choice
8924

Will Ukraine Get Its Own Unified Orthodox Church?
22758

A civilian who escaped from Azovstal walks to a bus past the Russian military on May 6, 2022 Photo: AP Photo / Alexei Alexandrov

Up to 170,000 people remain in the blocked Mariupol. It has long been impossible to leave the city for the territory controlled by Ukraine – the Russians leave the residents no choice but to agree to deportation to the "DPR" or Russia. Up to 95,000 Mariupol residents are currently being held in special camps in the Russian Far East.

Anton (name changed at the request of the interviewee) told hromadske about his journey from Mariupol. He went through filtration, passed through the "DPR", Russia, and Estonia to Poland. And from there he got to Ukraine and went to war to defend his homeland.

"We lived on Azovstalska Street"

For the past 10 years, I worked as a crane operator at the Azovstal plant. My last shift was on February 24. I heard explosions all day, but of course, I had no idea things would turn out the way they did. The next day, only some of the employees went to work, but they no longer worked – they guarded the plant. Then everyone was told to stay at home or in shelters.

My mother and I lived in a nine-story building in the Livoberezhny district, on Azovstalska Street. We did not hide in the basement. She is ill, it would be difficult for her to go down and up every time.

From March 18 it became impossible to live in our house. The house burned down from the 3rd to the 8th floor. We tried to put out the fire ourselves, but, of course, we did not succeed. I had to go live with my friend nearby.

From time to time we heard from the Chechens who were in the city that it was advised to leave the area because it would soon get "hot" here. But we couldn't understand how it could be “hotter” if shells were already exploding in front of our house.

I saw people being taken out of the city – the Russian military came to the house and said, "You have 10 minutes to get ready." They were placed into infantry fighting vehicles and brought to a checkpoint.

A week later, my mother said that she could no longer live under constant bombardment, shelling, and that we had to leave. I did not object, it was the only chance to escape from the blocked city. 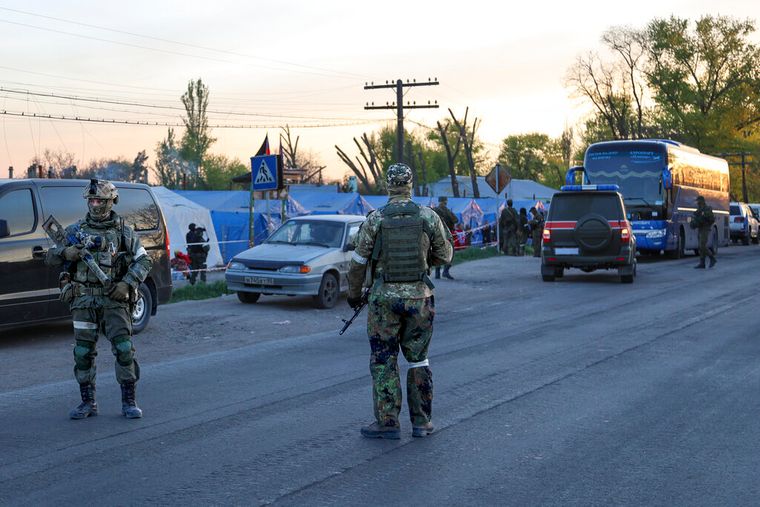 Russian soldiers in the temporarily occupied Bezimenne, where civilians were taken out of Azovstal, May 6, 2022

"Suspect" with a red and black tattoo

We could leave the Livoberezhnyi district only in one direction — towards “DPR”. At that time, many Mariupol residents did so. So on March 25, we packed and went with my mother seven kilometers along the seashore, towards the “DPR” checkpoint.

The women were not particularly checked, but I was searched thoroughly. For them, I was a "suspicious person" – with a red and black tattoo and a military ID card, which stated that I had served.

Several times I was stripped naked and taken to the Lyapino district for inspection, where they occupied a private house. As I understood, those were "DPR" spies.

They found a message on my phone: “Glory to Ukraine! Death to enemies!". Of course, they didn't like it very much — but they didn't use force, resorting to intimidation.

Eventually, I was brought back to the checkpoint and put on a bus to Bezimenne. From there my mother and I went to visit relatives.

I had no desire to stay with them for long, so in six days I decided to go on. My mother chose to stay in the “DPR”.

In the "DPR", you had no choice but to go through the filtering to be safe on their territory or proceed to Russia.

People were collected for filtration and taken en masse to various occupied cities. It came to the point that buses came, where women, children, and the elderly were allowed, while men were not. Many were unhappy about the requirement to separate from their families. People had to wait for buses, which allowed men, for almost a week.

I was subjected to filtration in Dokuchayivsk. I waited in turn for about two days. It seems to me that in the “DPR” this process has been simplified. In all likelihood, they received an order to send people to Russia as soon as possible.

The filtration was arranged as follows: a group of 15 people enter the police department building, where their passports were confiscated. Then they go to different rooms, where fingerprints and photos are taken. Then a quick search through the phone followed. They copied all the contacts in one file and didn't even ask if I served or had a tattoo. I passed the filtration the same day I arrived.

The next day a bus came to pick us up. Those who wanted to stay in the "DPR" were taken out last.

"First of all, we board those going to Russia!" I heard. 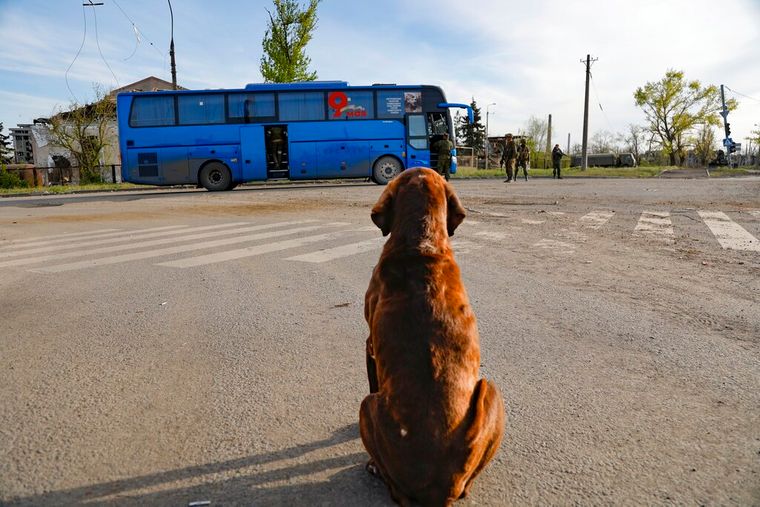 Bus with civilians who left the shelter on the territory of Azovstal plant, surrounded by Russian soldiers, May 6, 2022

"People were brought in, and my documents were kept aside"

We were brought to the border, where we had to wait five hours. The “DPR” customs did not hold up people much, but there was a serious check at the border with Russia: our fingerprints were taken again, photos were taken, and distinguishing features were recorded.

I wiped my phone completely, because the day before I heard the story of a couple who were held at customs for 36 hours as border guards found photos suggesting that they were once volunteers.

I had a different story. At the Russian border, the FSB lieutenant did not like me: he asked why my phone was wiped, whether I had served in the military, had ever been to the Crimea, or had friends in the Armed Forces.

The color of my tattoo also raised questions, because red and black are the flag of the Right Sector. They asked me whether I was perhaps a Bandera supporter.

I replied that I spoke Russian, but I could also speak Ukrainian. They tried to find fault with anything.

Thus almost seven hours passed. Other people were brought in and taken out, while my documents were kept aside. In the end, I was allowed to proceed to Russia.

The way to Ukraine

After filtering, many people were promised that they would be taken to Rostov-on-Don. But the transfer point, the "Center for Temporarily Displaced People," was in Taganrog, a large sports school with appalling conditions. As I heard, there were unsanitary conditions, and people got poisonings.

We were dropped off outside this center. Thereon there was no control – you could go inside or do what you want. Many were picked up by relatives. I went to Rostov-on-Don, where I rented a hotel room.

In volunteer and activist groups I found information on how to leave Russia. With their help, I took a bus to the border with Estonia, where I passed customs in ten minutes and the police told me how to proceed.

After Estonia, I went to Poland via Lithuania and Latvia. And in 12 days, as soon as I got my act together, I decided to return to Ukraine.

I could not stay abroad in the current situation.

We recorded the conversation with Anton on April 27. A few days ago, we received a brief update from him that he had been drafted into the Ukrainian army.