"Cyborg" Valerii Honta died on the frontline in eastern Ukraine
2474

In 2020, many people were affected by lockdown and the coronavirus crisis. The problems of social groups, whose rights were violated regularly even before the epidemic, only got worse. During this time, the number of attacks on LGBT human rights centers increased, and transgender people were forced to stop hormone therapy and were unable to see a doctor due to problems changing documents. So how have quarantine and the epidemic affected the LGBT+ community?

"At the end of April, I was forced to stop hormone therapy, and I was able to resume it only four months later, in early September," says Oleksandr (the surname is omitted at his request).

Oleksandr is transgender. Since 2012 he has been taking hormone therapy. It is prescribed to transgender people to reconcile their gender with gender identity. Under the influence of hormone therapy, the appearance changes: facial features, figure, transgender men begin to grow a beard and their voice changes.

According to Oleksandr, since the start of quarantine, most of his transgender acquaintances could not buy hormones due to lack of funds. But even if money wasn’t an issue, finding drugs in pharmacies was quite problematic: stocks ran out, and new ones could not be imported from abroad due to the lockdown.

"I could not find my drug in pharmacies at all. It hit me hard psychologically. At that time, I was very worried because I didn't know if this drug would be available in Ukraine, if I could buy it in a pharmacy, and how long it would take,” he says.

Discontinuation of hormone therapy is a major stress for the body, Oleksandr explains. He had previously stopped taking hormones for short periods of time for personal reasons.

"I had dizziness, nausea. My body is already used to a certain level of hormones, and suddenly they are gone. Only in December, a few months after resuming therapy, I began to feel normal," he recalls.

According to the "Study of the needs of transgender people in Ukraine", about 15% of respondents (134 people from Ukraine took part in the study) could not purchase the necessary drugs or hormones during quarantine. 13% were forced to stop the transition process, ie gender reassignment. In addition, more than a third of respondents said they could not visit a doctor during quarantine. In total, according to human rights activists, there are currently about 500 transgender people in Ukraine. 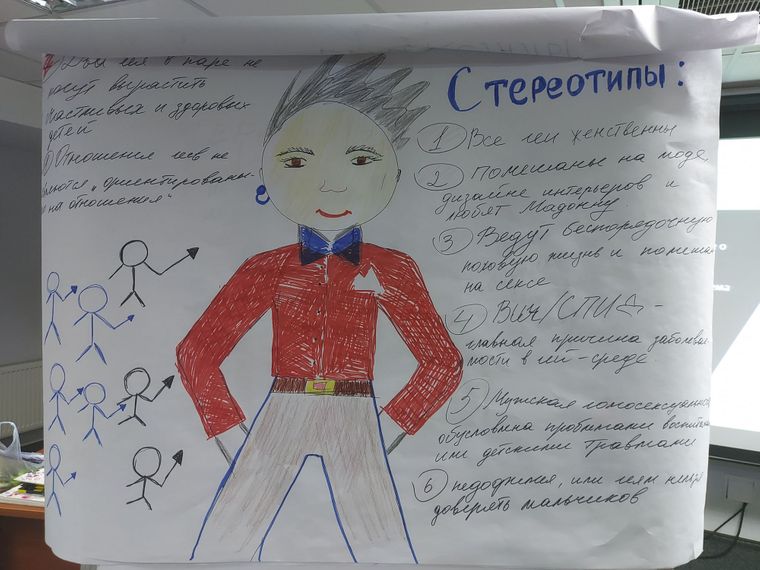 Notes from a training outlining main stereotypes related to the perception of the LGBT+ community. Photo: Anastasiia Yeva Domani / Facebook

Transgender woman, human rights activist and LGBT activist Anastasiia Domani notes that during the epidemic in Ukraine, most transgender people were forced to stop the transition. In particular - due to the inability to change the documents.

The gender reassignment process in documents can take years, so transgender people are more likely to ask the Civil Registry Office ("DRATsS") to change their name to one that matches their gender identity.

"We have been approached by many people with complaints about the problem of changing documents. They said that they had to stand in lines on the street in front of the DRATsS, and they had to shout the reason for changing the documents just outside. For many members of the community, this is a stressful time, because why should complete strangers standing nearby know about you,” says Domani.

Changing documents for transgender people is an important point, because in the process of transition when the appearance is already different from that recorded in the documents, there may be problems - for example, when hiring or filing a declaration with a family doctor. According to Domani, some of those who did not change their documents during the quarantine could not even seek medical help.

Activist and transgender woman Nataliya Zhuravlyova says that most people with this problem are even afraid to go to the doctors themselves, because they know that they will receive condemnation and misunderstanding from them.

"Because of the discrepancy between appearance and documents, some transgender people do not sign a declaration with a family doctor, so they do not even have the opportunity to turn to specialized doctors and are not treated," she says.

During the quarantine, Oleksandr was forced to give up renting his own apartment because he lost his job. He decided to rent an apartment together with other transgender acquaintances. The boy did not have the opportunity to seek help from his parents because he does not communicate with his relatives.

"When the quarantine was relaxed, I decided to move to a hostel because my friends rented an apartment far from my job - I spent two hours commuting one way," says Oleksandr.

Life in a hostel turned out to be quite dangerous for the guy. On several occasions, he was threatened by strangers.

"Once a naked man picked on me in the shower, he tried to flirt with me and waited for me outside the shower. It was scary and unpleasant. The roommates didn't like my appearance, I was threatened with rape, and they didn't even know I was a transgender person,” Oleksandr says.

He filed a report with the police, but never received help from law enforcement. Eventually, Oleksandr left the hostel for an apartment with friends.

During the epidemic in Ukraine, many people lacked funds to rent housing. However, according to Olena Shevchenko, head of the human rights organization Insight, if heterosexual people can turn to their parents for help in such a situation, members of the LGBT+ community often do not have such an opportunity because their relatives do not accept them.

According to the "Study of the needs of transgender people in Ukraine", almost half of respondents (44%) had financial problems during the lockdown in 2020. 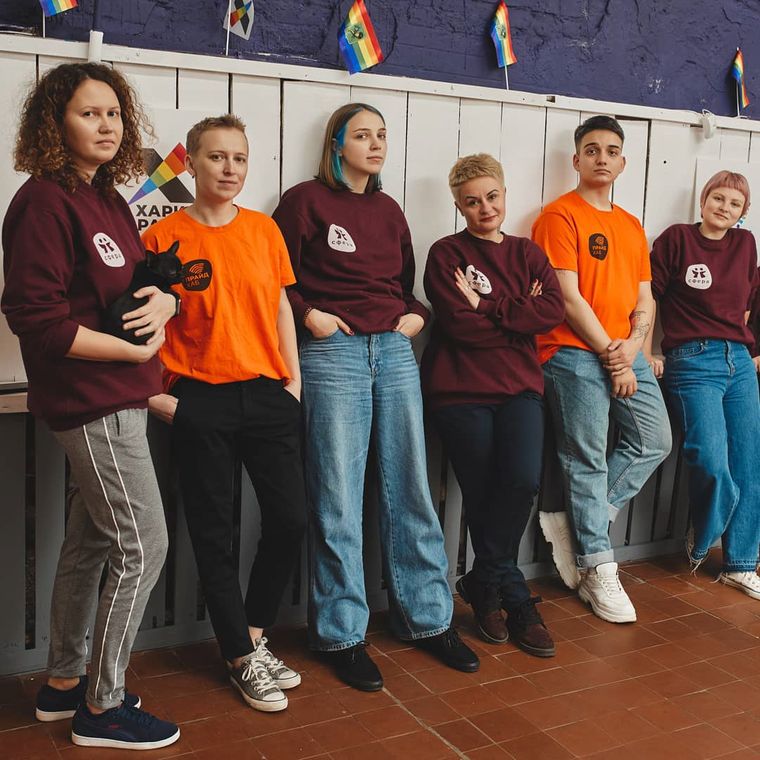 In the beginning of September there were three identical attacks on the Kharkiv LGBT center "PrideHub". Among the attackers, PrideHub employees identified representatives of the local branch of “Tradytsiyi i Poryadok” ('Traditions and Order' - an all-Ukrainian conservative right-wing radical organization). The attackers threw eggs at the entrance to the office, poured urine on them, made insulting and threatening inscriptions on the walls, and the final time smashed the windows. The walls of the organization were covered with their stickers.

Also in 2020, 20 property crimes were recorded, where victims were purposefully selected because of their sexual orientation and were subsequently extorted money or blackmailed. This is stated in the annual report, a draft of which was provided to hromadske by the LGBT Human Rights NASH MIR Center. The full report will be presented on February 3.

Also in mid-December 2020, a number of homophobic attacks were committed during a week in Kyiv's Podil district. The monitoring network of the NASH MIR center documented two such cases, but, according to the organization, there were at least two more attacks.

"‘TiP’ posters can be seen all over Podil, they walk around in groups of 10-15 people and attack those who, in their opinion, look unconventional, and those are not always LGBT people," says Shevchenko.

Such attacks, according to the human rights activist, may be associated with rising tensions in society: a new lockdown, an increase in the number of coronavirus patients, financial problems - factors that can make people more aggressive.

In a stressful situation, according to Shevchenko, society has no time for tolerance. It’s not only members of the LGBT community who suffer because of this - during the quarantine period the number of cases of domestic violence and attacks on members of other nationalities has also increased.

READ MORE: “Coronavirus Took My Job”: People Who Lost Their Jobs During the Quarantine

Sviatoslav Sheremet, the policy and legislation coordinator of the National MSM Consortium, says that during the lockdown in the spring of 2020, HIV-positive gay men on antiretroviral therapy had problems with medication. Such medicines are free in Ukraine, but some members of the LGBT+ community were unable to obtain them because they were forced to stay in other countries for some time due to border closures.

Andriy Chernyshev, head of the foreign relations and advocacy department at the Alliance.Global NGO, said that during the quarantine, they began receiving requests for help, mostly from Poland, Czechia, and Russia. Local organizations and European human rights networks helped to find a cure on the ground.

"We tried to resolve this issue quickly so that people could continue to receive drugs for free," says Chernyshev. 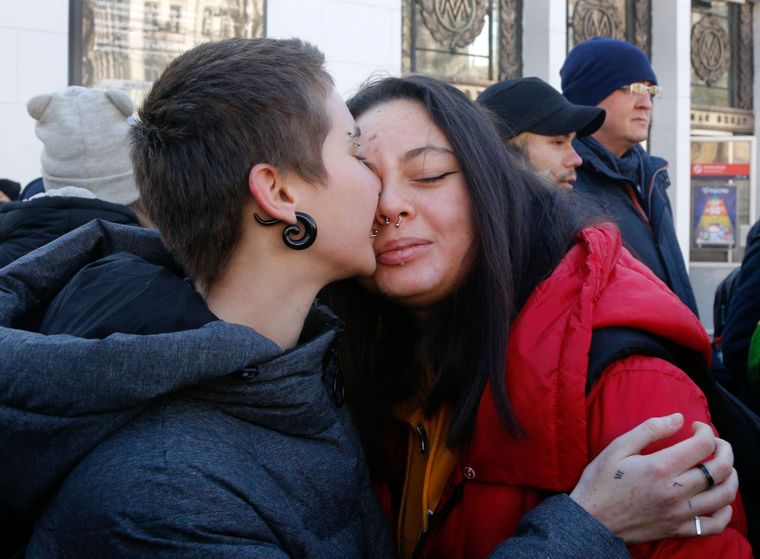 Two young women, who identified themselves as Red and Merin, both 16, kiss at an LGBT rally a few days before International Transgender Day of Remembrance in Kyiv, Ukraine, on November 18, 2018. Photo: AP / Efrem Lukatsky

With the beginning of the active spread of coronavirus around the world, a variety of fakes and theories about the nature of its occurrence began to spread. Some members of the religious community also used the coronavirus to spread their views. In the spring of 2020, Patriarch Filaret said that one of the causes of the coronavirus is same-sex marriage.

"The cause of the coronavirus is the sinfulness of mankind. Wherein lies the peculiarity of sin? Openly, good is not protected, while evil is, and not only is it protected, it is spread. I mean, above all, same-sex marriages," Filaret said then.

At the time, NGO Insight, which is engaged in human rights and education activities and provides assistance and support to LGBTQI people, filed a lawsuit with the Shevchenkivskyi District Court of Kyiv over Filaret's statements. However, according to Shevchenko, court hearings have been postponed three times due to COVID-19.

"We are waiting for a hearing after the lockdown. Filaret's statement greatly influenced the position of the people, especially in the religious regions. There was already a bad attitude towards the representatives of the community, and after his words the situation got worse,” Shevchenko explains.

In 2020, Pope Francis for the first time publicly expressed support for civil partnership for homosexuals. But Shevchenko believes that such statements at the global level won’t help improve the situation within Ukraine.

"Such statements only affect a 'bubble' i.e. people who are interested in it. And Filaret here, in Ukraine, speaks from the television. And people do listen to him," says Shevchenko.

Russia Cracks Down on Crimean Activists and Minorities