donate
Hromadske UAHromadske RU
AboutWhere to watchAuthors
Contacts
Society
Assassination Attempt on Zelenskyy's Aide. Who Is Serhiy Shefir and Why the Shooting?
62475
Trending
3495

Rada extends martial law in Ukraine for another 90 days
114

Akhmetov to sue Russia over destroyed enterprises in Donbas, including Azovstal
Editors' Choice
13688

“I’m the Change”: What It’s Like to Be Feminist in Moldova, Armenia, Ukraine, and Russia
22293

First Aide to the President of Ukraine Serhiy Shefir during the meeting of the National Council on Anti-Corruption Policy in Kyiv, July 18, 2019 Photo: UNIAN / Inna Sokolovska

Although Ukrainian politics is hardly the cleanest, it has been a long time since players have had to resort to bullets to demonstrate strength. However, on the morning of September 22, the car of First Aide to President Serhiy Shefir was fired at with automatic weapons. Unknown people fired over a dozen bullets, several of which hit the driver. Shefir himself was not injured.

What and who could be behind this attempt reminiscent of “the roaring nineties”, how did the authorities and Volodymyr Zelenskyy react and how influential is the figure of Shefir in the President's Office? Oleksiy Bratushchak and Pavel Kalashnik dive deeper into the matter.

Shefir has known Volodymyr Zelenskyy since the days of the KVN, a humor TV show dating back to 1961. In the early noughties, he, together with his brother Borys and Zelenskyy himself, founded the studio "Kvartal 95", which would later pave the way for them into big politics. And not just into politics, but to its highest level.

During the presidential campaign, Shefir was perhaps Zelenskyy's closest ally, his confidant. And after the victory, Shefir was named one of the main contenders for the post of head of the Presidential Administration.

In the end, he did not get this position (as Shefir himself said, he is not interested in positions and portfolios, but he does everything for Zelenskyy's sake), but was appointed first assistant to the head of state. And although formally this is not a very influential position, Shefir remained one of the closest people to Zelenskyy and has direct access to his "ears".

Shefir's official job is to organize the president's work and communication, but his behind-the-scenes activities point to far more weight.

One of the vectors is dialogue with the oligarchs. He himself does not deny that he has meetings with some of the wealthiest people in the country, but denies any backroom deals.

Earlier, Shefir admitted that he took part in talks with Akhmetov, after which the oligarch helped buy 200 ambulances. However, according to the Ukrayinska Pravda, the oligarch was not only engaged in public charity, but also allegedly was a secret philanthropist of the ruling party Servant of the People to the tune of $2 million a month. Both Akhmetov and the President's Office denied this.

In the case of the secret meeting with Ihor Kolomoisky, Shefir asserted that he was discussing the affairs of Kvartal 95, not politics.

In addition to delicate negotiations with business and the oligarchs, Shefir also has an influence on personnel policy. For example, the appointment of Herman Halushchenko as Vice President of Energoatom was linked to Shefir. Halushchenko is now the Minister of Energy. The media reported that Shefir also allegedly oversees the Odesa Port Plant.

Overall, only the head of the President’s Office Andriy Yermak has more political weight in Zelenskyy's Office. And even that's not a given. 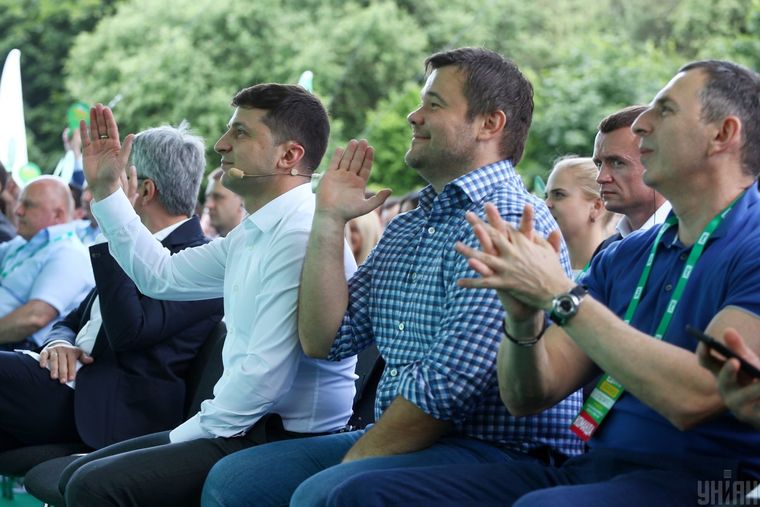 The reaction of the President’s Office to the assassination attempt did not take long.

"This can be interpreted only as a reaction of criminal or semi-criminal structures to the policy aimed at cleansing political and economic relations in the state. It is impossible to consider it a coincidence," said Mykhailo Podoliak, an adviser to the head of the President's Office, in a comment to hromadske.

He also promised a tough response from the state to both crime committers and instigators, and assured that the government's policy will not change.

"The oligarchic system will be liquidated, and all ‘authorities’ who are used to living above the law will be forced under the rule of law. They will not help themselves with any attempts or other crimes," the office representative summed up.

Zelenskyy himself, who was in the United States at the UN General Assembly at the time, was also quick to record an address, in which he stated that he would return to Kyiv immediately after his speech at the UN.

"I do not know who is behind this. Yet. There may be internal forces, there may be external ones. But I don't consider them strong, because to call me out with shots from the woods on my friend's car is weak. But the response will be strong. The strength of our team is not affected. The course I have chosen together with my team - to change, to de-shadow our economy, to fight crime, large influential financial groups - is not affected in any way," the president said.

As can be seen from the above, the authorities, at least officially, have several main lines of enquiry: the attempt is related either to "de-oligarchization" or to the fight against crime. In the case of the first, it was interesting that the shooting came a day before September 23, when the parliament considered the "law on oligarchs" in the second reading.

READ MORE: Who Are the Oligarchs Counting on in Ukraine's New Parliament?

However, not everyone in the president's team believes in the involvement of the country's wealthiest people in the assassination attempt.

"I would discount oligarchs. Even those that were once ‘authorities’ in the 1990s and are now legalized. This is most likely a greeting from crime lords. No matter what you say, there are a lot of dissatisfied bandits - ‘thieves-in-law’ and smuggling schemes. And these are thugs," said one of the "servants" in a conversation with hromadske.

In 2021, the National Security and Defense Council has repeatedly imposed sanctions against smugglers and various criminals. And although these actions were severely criticized, in particular, for the selectivity and unclear criteria for inclusion in these lists, a large number of people came under sanctions.

People from the ruling team also point out that the assassination attempt on Zelenskyy's close friend is a signal to the president.

Shefir himself thinks so, emphasizing that the goal is not him, but "the president, his moral and psychological condition."

"The president's aide is one of the key people in the team, so it's clear that this is due to his political activities," said Oleksandr Korniyenko, head of the Servant of the People party.

Another major suspect is Russia. In particular, during the briefing, the head of the National Police Ihor Klymenko named three main lines of enquiry, among which were the actions of foreign intelligence services to destabilize the political situation in the country.

"Perhaps the Russian trail should not be ruled out. A lot of actions are being done now that the aggressor country does not like. We know their ability to organize terrorist attacks in other countries," Korniyenko said.

"I would not single out the law on oligarchs as the only possible version. We need to look wider. Even raising taxes is more painful for certain groups. As for the situation itself, who can benefit from it, Russia can too. Their favorite trick is to destabilize the situation inside the country," a representative of Zelenskyy's team told hromadske.

Or maybe a conflict within Ze-team?

Another version that is being discussed is infighting within Ze-team. However, it is not regarded as seriously as others. And it is not entirely clear what can be achieved in this way.

In addition, not so long ago, Ukrayinska Pravda reported that Zelenskyy had a quarrel with Shefir, and now the latter has no influence on the government's decisionmaking. Andriy Yermak, the head of the President’s Office, allegedly had a hand in this, as he believes that the president could have only one right hand (i.e. him), so he did everything to nullify the influence of Zelenskyy’s old friend.

At a briefing after the assassination attempt, Shefir himself denied any conflicts.

"I have no conflicts inside or outside the team. Everything that was written on social networks… I read, I smiled. I have no idea where they get this from. To be honest, I've been working on Kvartal 95 for the last few days, there will be a televised concert on Saturday and Sunday. I have not conducted any cases that would cause aggression," he said.

Another member of Zelenskyy's team could not confirm the conflict with Shefir during a conversation with hromadske.

"It seems to me that this is a story from Telegram channels. Shefir was present at all joint meetings. Shefir and Zelenskyy have been working together for too long for someone to cause trouble between them so quickly," the source said. 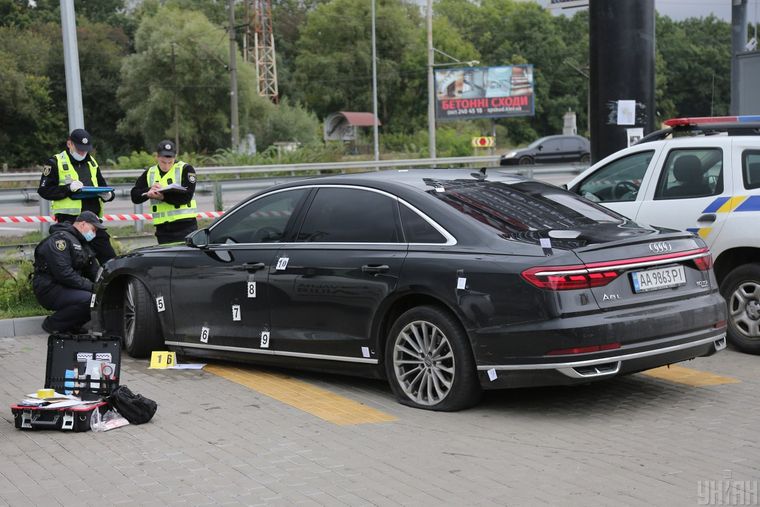 The police task force is conducting investigative actions at the site of the assassination attempt on Serhiy Shefir near the village of Lisnyky (Kyiv region), on September 22, 2021. Photo: UNIAN / Viktor Kovalchuk

As is always the case, while some determine the main versions, others immediately offer to look at the situation from the opposite angle - perhaps it was staged, so that there would be a reason to attack someone later? In addition, Shefir is from the film industry, so he is knowledgeable in such performances.

Some began to point out that only the driver had been shot, and that bullets had not hit the back of the car where Shefir was.

Historical comparisons also took place - with the arson of the Reichstag in the 1930s, after which the Nazis usurped power in Germany. In particular, such an analogy was made by both Russian propagandist Olga Skabeeva and respected Ukrainian online media. Of course, opponents of the government emphasize this version.

The official line of enquiry rejects staging. According to the Minister of Internal Affairs, it was an assassination attempt.

"Everything is serious, everything is real. Shefir could have died. Such things are not done artificially. The driver took three bullets, the whole car is covered in bullets. It’s not like: we shoot the driver, and I’ll just be in the back seat. The car was traveling at high speed," hromadske was told by a source in law enforcement.

As another source suggested (and later Shefir himself told at the briefing), the bullets hit the driver, and he accelerated instead of stopping.

"They fired from machine guns, we are currently determining whether there was one gunman or more. They fired from the woods. So it is a classic contract killing," he concluded.

We asked the President's Office whether this attempt would be an occasion to "get tougher".

"Definitely not. The president wants transparency and other public rules. And not some shadow redistribution of powers," Mykhailo Podoliak assured.

So far, this story presents more questions than answers. However, without a doubt, a machine-gun fire on the third most influential person in the country is a negative sign.

Prosecutor General Irina Venediktova has already stated that this is a challenge to the law enforcement system. Such loud statements after high-profile attacks are, of course, commonplace for Ukrainian law enforcement and often remain mere words. One can, in particular, mention the murder of Pavel Sheremet, which is still unsolved. Let's see how the system responds to the call when the victim is, so to speak, of the same class.

Zelenskyy Vs Klychko: Coercion to Loyalty or Neutralization of Competitor?
3012
Society