donate
Hromadske UAHromadske RU
AboutWhere to watchAuthors
Contacts
War
“A tank was chasing us, and we were trying to get away.” How paramedics evacuate wounded soldiers
543
Trending
4086

Missile strikes on Dnipro and Kramatorsk, shelling of Dnipropetrovsk Oblast and Mykolaiv: the highlights of today
2366

Half a thousand Ukrainian soldiers are wounded on the front line every day. That’s the number announced by President Zelenskyy back in June. Meanwhile, the paramedics, those who save the soldiers’ lives, are also dying. They are priority targets for enemy snipers because destroying a paramedic means destroying a dozen more fighters. They teach it in Emergency Medical Care training.

Read how paramedics from Kharkiv and Donetsk Oblast evacuate the wounded and what the conditions they work in are below. 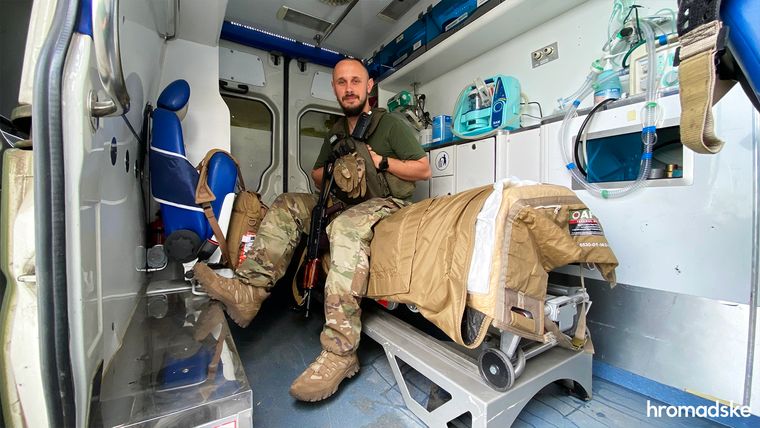 Anton Hrytsunov, a paramedic of the special unit “Da Vinci Wolves” of the Armed Forces of Ukraine with the call sign “Marik”

“When Russians see an ambulance, they try to shell it”

For four months now, Anton Hrytsunov with the call sign “Marik” has been evacuating the wounded from the battlefield. He is a paramedic of the special unit “Da Vinci Wolves” of the Armed Forces of Ukraine. We covered Anton’s story back in April. At that time, the 29-year-old anesthesiologist had just gotten out of occupied Mariupol by bicycle and planned to join the Armed Forces of Ukraine.

Instead of a white coat, Anton now wears armor, a gun, and a medical backpack, and his intensive care unit fits in a small bus. It has everything for medical evacuation. Only his call sign “Marik” reminds him of his past life in Mariupol.

“I got so used to it that I don’t know how to return to civilian life. Here I know that even if something happens to me, the guys will save me. It was harder when I was a civilian doctor (in occupied Mariupol — ed.), because no one needed us there,” this is how “Marik” begins our conversation about his new job.

When we met near Novohradivka, Donetsk Oblast, Anton started looking for a place under the trees by the road to hide his car. He explained: “When Russians see an ambulance, they try to shell it”. After all, destroying an ambulance means destroying dozens of servicemen.

Marik got to the east by accident: the direction didn’t matter to him, he just wanted to be useful and do his job.

“Of course, I would like to work for the de-occupation of Mariupol, for example, but there are other tasks now. I went to the East because it is the hottest direction, and the special unit “Da Vinci Wolves” is trying to be effective in the war, that’s why it is here,” “Marik” says. 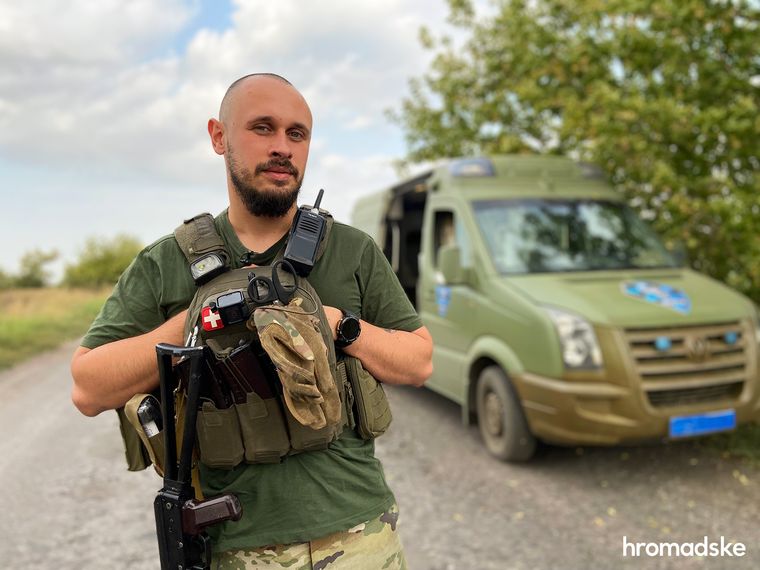 Anton Hrytsunov, a paramedic of the special unit “Da Vinci Wolves” of the Armed Forces of Ukraine with the call sign “Marik”

“You’re finishing your studies, and we need medics”

In addition to “Marik”, two more military medics are working in the special unit to evacuate the wounded. Lianna has been at war since 2016 when she was 19 years old.

“It was not my goal to go to war. In 2014, I was studying and didn’t think about it at all. And when I graduated from medical school, my friends who were already serving at that time called me and said: “You are finishing your studies now, right? We need doctors,” retells Lianna.

The girl recalls that there were really not enough paramedics back then, especially with medical education, so she decided to join the Armed Forces. For a long time, her parents did not know that their daughter was in the army, only her brother knew.

“Why would I tell them? To make them worried?” Lianna says briefly.

After three years on the front, the girl returned to civilian life. There were enough military medics at that moment. She even got used to it, but then, February 24 came.

“They started calling me again, saying that they needed a medic who is engaged in evacuation, but I couldn’t leave civilians at that time. I said I’d finish working with them and come. I finished with my documents, packed up, and left. I couldn’t refuse, having the necessary skills. Sitting on the sidelines is wrong,” says Lianna.

“I would get out of the car covered in bruises”

When the units go on a mission, military medics go with them. While the unit is working, medics are on duty — they are waiting for a call a little further from the battlefield in a relatively safe place. If someone among the military personnel is injured, they come to evacuate them.

“We come to the evacuation point, which was agreed in advance. There, we meet the first car that evacuated the wounded person directly from the battle. We put the fighter in our car and go. We provide medical assistance immediately in the car,” says “Marik”.

We have to leave the evacuation site as soon as possible because the car is quite large, so if the Russians notice it, they will fire immediately. However, sometimes the roads are so bad that the only thing doctors can do is fasten the patient to a gurney.

“I would get out of the car covered in bruises because we can’t keep still as the ambulance is moving, and we are trying to provide some first aid to the wounded,” says Lianna.

However, “Marik” says that while in the car with the wounded, it is difficult to focus on the explosions and shelling around: “At that moment, I can’t hear what’s going on, because I’m focused on the patient. Later I am told how something exploded next to us, but I don’t even remember it”. 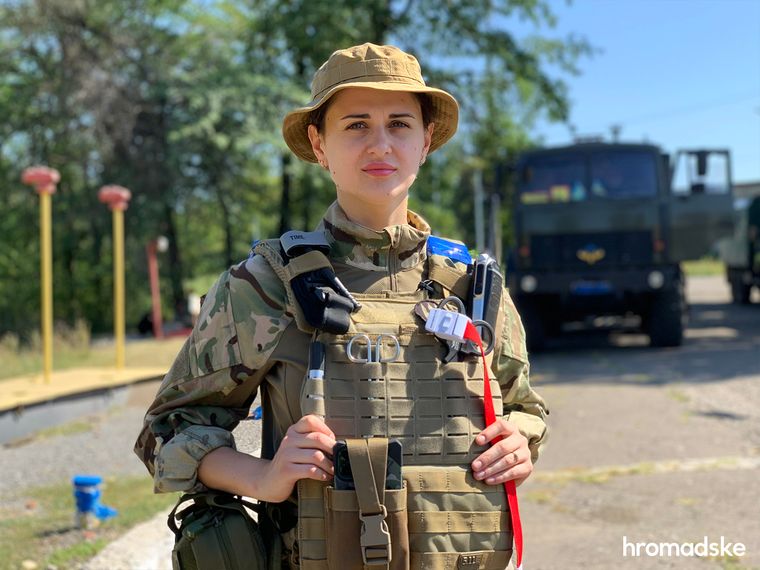 Paramedic Lianna, who has been at war since 2016

“This car has a small intensive care unit inside”

“Everything happens right here,” says Anton, opening the evacuation car’s door in front of us. Explosions are very close, but “Marik” does not even blink an eye and speaks calmly: “It’s from our side”. And continues the story: “In this car, we can ensure full anesthetic management: there is a device for artificial pulmonary ventilation and oxygen. There’s a small intensive care unit inside. You just need a surgeon who will perform minor surgeries here”.

Such vehicles first appeared in the 1st Separate Assault Company of the Ukrainian Volunteer Corps Right Sector (now the special unit “Da Vinci Wolves” of the Armed Forces of Ukraine) at the beginning of the Russian invasion of Ukraine. It was Alina Mykhailova and Yuliia Sidorova with the call sign “Cuba Libre” who created medical service in the company.

“There were no analogs of such vehicles in Ukraine. Inside, there is the equipment identical to the one that should be in the evacuation transport of the NATO army,” says “Cuba”.

We met “Cuba” in Kharkiv. Since May, she has been serving in the Armed Forces of Ukraine — she works as a paramedic in the Kharkiv direction. From 2014 to 2019, she was a military medic in the 1st Separate Assault Company. Four cars that she drove to get the wounded came under fire and were destroyed by the Russians. “Cuba” was lucky to survive, and in 2019 she returned to civilian life.

“If it weren’t for a full-scale invasion, I’m sure I wouldn’t have returned. At that time, there were already a lot of paramedics for Donetsk and Luhansk Oblasts, but if we are talking about a war on the whole Ukrainian territory, these doctors were not enough,” says “Cuba”.

On February 24, her phone wouldn’t stop ringing: everyone was asking her to go to the front as a paramedic. In the end, “Cuba” chose her hometown of Kharkiv as a place of service. Now she works only at the stage of tactical evacuation because she does not have transport for medical evacuation. “Cuba” says that for the wounded to be fine, they must be taken to the hospital within one hour.

“Sometimes it happens that you don’t have enough time to get a person there. Therefore, you need to perform medical evacuation with oxygen and other equipment. We have almost raised money for the right vehicle, so we will make another medical evacuation vehicle,” says “Cuba”. 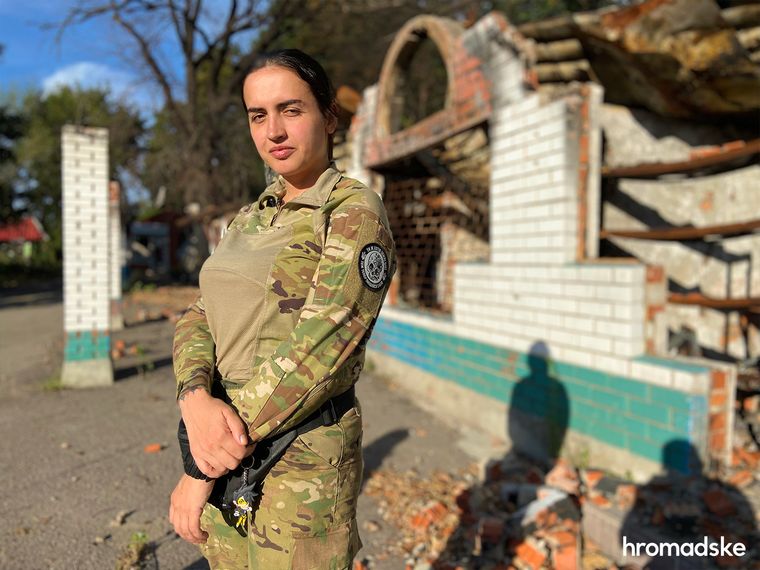 Yuliia Sidorova, a paramedic in the Kharkiv direction with the call sign “Cuba Libre”

“You don’t know if you’ll come back home”

Currently, the most common injuries in the military are missile injuries, mine-blast trauma, and concussions. “Cuba” says that the consequences of injuries can be minimized if pre-medical care is provided in a timely and correct manner.

“At the same time, there are still soldiers who do not know how to apply a tourniquet, even though a full-scale war has been going on in our country for half a year. Once, they brought us a fighter with a bandage on his eyes, while in fact, you can not apply bandages over eyes because they absorb everything. You will remove the bandage together with the eyes,” explains “Cuba”.

Sometimes you have to look for the wounded because the front line can change quite quickly, and it can be impossible to contact them because of problems with the signal. Therefore, there is fear of not finding the wounded. In addition, there is constant stress due to danger.

“During the full-scale war, a Russian tank was chasing us, and we were trying to get away from it. It couldn’t get us. There were explosions in front of the car and behind us. For me, it wasn’t even shelling because shelling is when a shell hits a place where you happen to be at the moment, and that tank was deliberately chasing us to destroy us,” says “Cuba”.

“Sometimes it’s difficult because you don’t know if you’ll be home in the evening. But humans get used to everything. Whatever your activity, you always think that someday something will change for the better, and there is no end in sight. It seems like you will be driving like this forever,” says “Marik”. He was saying these words to the sound of new explosions in the background.

The material was created with the support of Mediaset.