The commander of the Belarusian battalion Volat, who defended Ukraine, died in the battles for Lysychansk
Editors' Choice
8181

Editor's Note: This story first appeared on the Novaya Gazeta website. Since its release, the Joint Investigation Team of investigators from the Netherlands, Belgium, Australia, Malaysia and Ukraine indicted Russian citizens Igor Girkin, Sergey Dubinsky, Oleg Pulatov and a Ukrainian citizen – Leonid Kharchenko. According to the JIT, further indictments may follow. Following that, the BBC's Russian Service reported that Ukrainian citizen Volodymyr Tsemakh, linked to the MH17 downing in 2014, was captured by Ukraine’s security service (SBU) and taken to custody in the government-controlled territory. He formerly commanded anti-aircraft defense of the separatists in the town of Snizhne, which is near to where the Russian missile that brought down MH17 was fired from.

What were the Russian anti-aircraft gunners doing near the Ukrainian border on the day of the downing of the Malaysia Airlines Boeing 777?

Russia’s independent newspaper Novaya Gazeta got hold of some documents without a “secret” stamp. These documents were supposed to ensure security on public roads when Russian troops were on the move in June 2014. The newspaper also obtained extracts from orders that showed the division of allowances for air defense troops as well as the allocation of dry rations.

From the obtained documents, it is established that more than 170 of Russia’s servicemen from the air defense units were stationed near the border in the Rostov region on the day that the MH17 flight was shot down by the “Buk” air defense system. And two days before the Boeing tragedy, on July 15, the troops received five days worth of dry rations. In order to assess the accuracy of the information given in the documents, Novaya Gazeta appealed for clarification to the Ministry of Defense of the Russian Federation.

The tragedy occurred over the Hrabove village in the occupied part of Ukraine’s Donbas (35 kilometers from the border of Russia) on July 17, 2014, claiming the lives of 298 passengers, including 80 children. The civilian aircraft headed from Amsterdam to Kuala Lumpur and, flying over the Donetsk region at an altitude of 10 thousand meters, was hit by a ground-to-air missile from the “Buk” installation.

According to the findings of an international investigation team (JIT), Boeing was attacked by the “Buk” complex – a complex that was at the time at the disposal of the pro-Russian separatists. The installation itself was obtained, according to the investigators, from the territory of Russia and belonged to the 53rd Air Defense Brigade (military unit 32406) of the Armed Forces of the Russian Federation, stationed near the city of Kursk. JIT experts studied testimonies and raw footage from June 23-25, 2014, namely, photos and videos of the movement of Russian military columns on public roads near the western borders. In those shots, the “Buk” installation is also recorded with a partially readable tail number 332.

The JIT found “Buk” with traces of tail number 332 – it was part of a column of military equipment arriving from the Kursk Region to Rostov Region on June 25, 2014 (the start of the movement was recorded on June 23). On that day, the convoy was spotted in the Russian town of Millerovo, 30 km from Ukraine’s border. Subsequently, after three weeks, "Buk" with traces of number 332 would be found in the Donetsk region. Amateur footage of the “Buk” would be recorded on several occasions. Which is not surprising – the appearance of military equipment on the roads in Russia and Ukraine in 2014 was becoming ever-more present.

In the records that were intercepted in Donbas, it is clear that the “Buk,” accompanied by several civilian vehicles, is moving in a white Volvo tow truck. 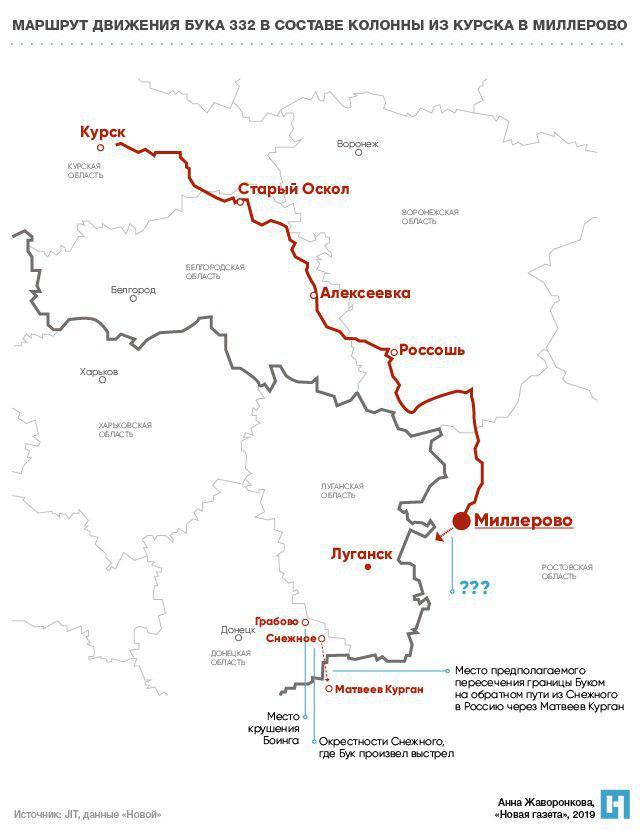 After examining numerous photos and videos, JIT investigators established several unique external characteristics of the Kursk “Buk 332”, corresponding to the worn-out complex, captured in Donbas. For example, the location and proportions of markings and spots of paint on the body, as well as the absence of spokes on one of the wheels of the air defense system. The Russian authorities, namely, the Ministry of Defense, called the JIT report “unsubstantiated,” and said the videos and photographs were falsified.

However, the findings of JIT on the movement of the Kursk “Buk 332”, can also be confirmed by the documents of the military itself – documents that are also at the disposal of Novaya Gazeta. In particular, the telegram, dated June 22, 2014, from the duty officer, Captain Belyaev, of the 11th Regional Military Automobile Inspectorate (MAI), shows the order to organize the columns of military equipment on public roads on June 23. 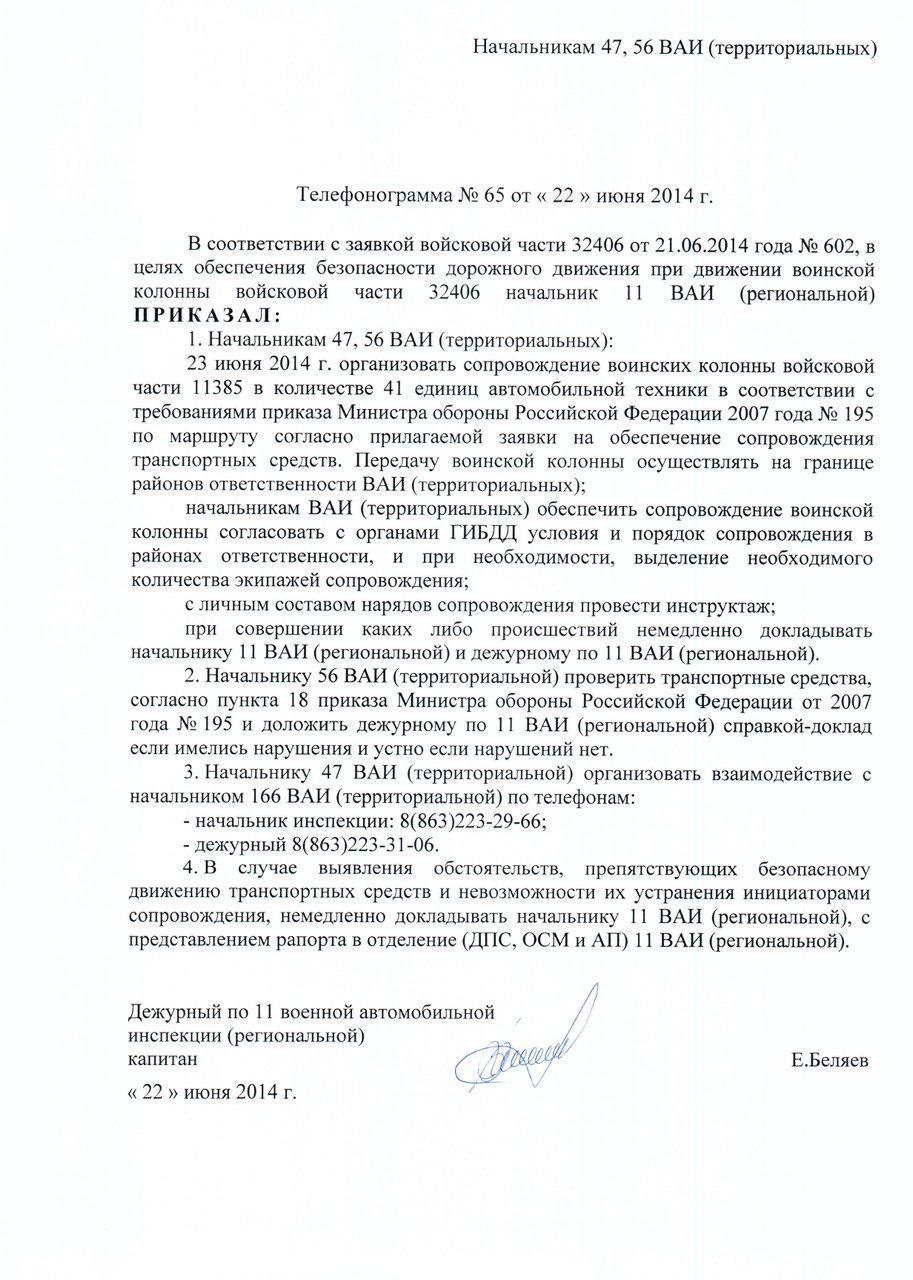 The document demonstrates that the transportation of equipment of the 53rd Kursk air defense brigade would be carried out by the 69th logistics brigade (military unit 11385). It should be noted that the Belyaev telephone message confirms the version of the authors of the Bellingcat investigative website about the participation of personnel and trucks of the 69th brigade in moving vehicles from Kursk, which was announced by it back in 2017.

In another document, signed by a lieutenant colonel from the 69th brigade by the surname of Aladyin, there is a list of several trucks with drivers who arrived in Kursk from Belgorod. In particular, Kamaz truck with a “black” state number 4267 AH and its driver “private A.N. Butikov” appear. Later, this particular Kamaz will be photographed during the transportation of “Buk 332” to Millerovo.

Aladyin also indicates that the senior lieutenant Iskanderov was appointed head of the Kamaz column. The names of two more officers “for reference and coordination” are given – Lieutenant Colonel Vitaliy Ryzhov and Major Alexei Egorov.

So, from June 23 to 25, a column of military equipment moved from Kursk to the Millerovo military base near the Ukrainian border. This is confirmed by raw footage and documents from the military. Further events can be reconstructed according to the documents concerning the food rationing of personnel. In particular, the food allowance – three hot meals a day, provided both in the field and at the base.

Following the order, signed by Acting Commander of the unit 32406, Lieutenant Colonel Demidov and Acting Chief of Staff Major Gorlatykh, the Kursk military brigade arrived in Millerovo on July 15, 2014. The document lists the names of more than 170 people; the first among them is the commander of the unit, Colonel Muchkaev.

The basis of the telegram is from the head of the Russian Air Defense Forces on July 13, 2014. 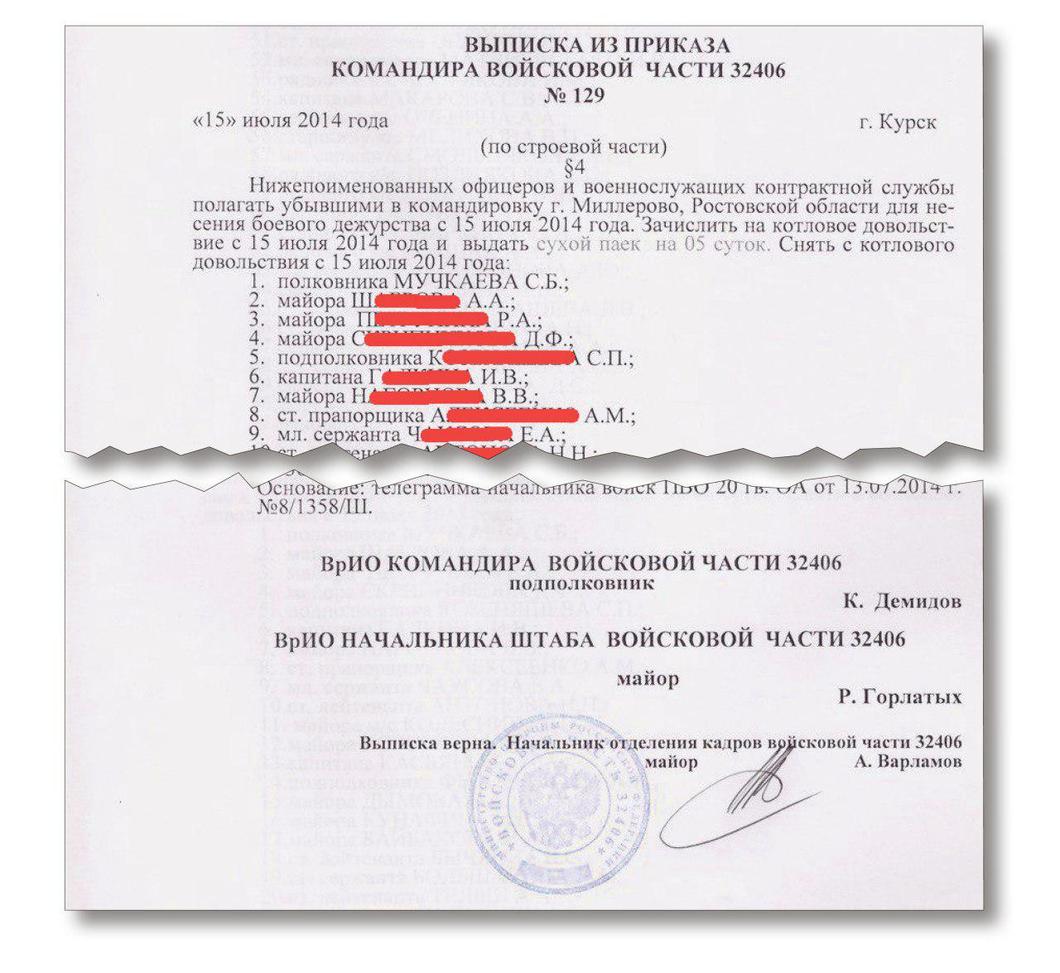 Let’s emphasize once again the curious details: it follows from the documents that the anti-aircraft units arrived in Millerovo almost three weeks later than their equipment; they were provided with food allowance, then immediately relieved of it, but they also received dry rations for 5 days (which are issued when cooking services are not available).

In a telephone conversation between Russian General Oleg Ivannikov and field commander of so-called Luhansk “people’s republic” Oleg Bugrov, which took place on July 14, 2014, Bugrov complains about Ukrainian military aviation, stating that it “damages the positions” of the separatists. In response, Ivannikov says that there are “a few more days left”: “We’ve got a “Buk”. With which we’ll bring them right down."

According to Novaya Gazeta, these and other telephone conversations at the disposal of JIT can form a basis for the accusations of specific Russian military leaders.

The fact of the arrival of soldiers from the Kursk unit to the border town, Millerovo, on July 15, 2014, aggravates suspicions and justifies the questions raised by JIT investigators in 2018.

Officially, the command of the 53rd brigade does not comment on the information regarding their own involvement in the tragedy of MH17. For several years, the Russian Defense Ministry has been repeating the same answer that no military equipment has crossed the border. The editors of Novaya Gazeta decided, without any intermediaries, to talk with the former and current soldiers of the 53rd brigade. 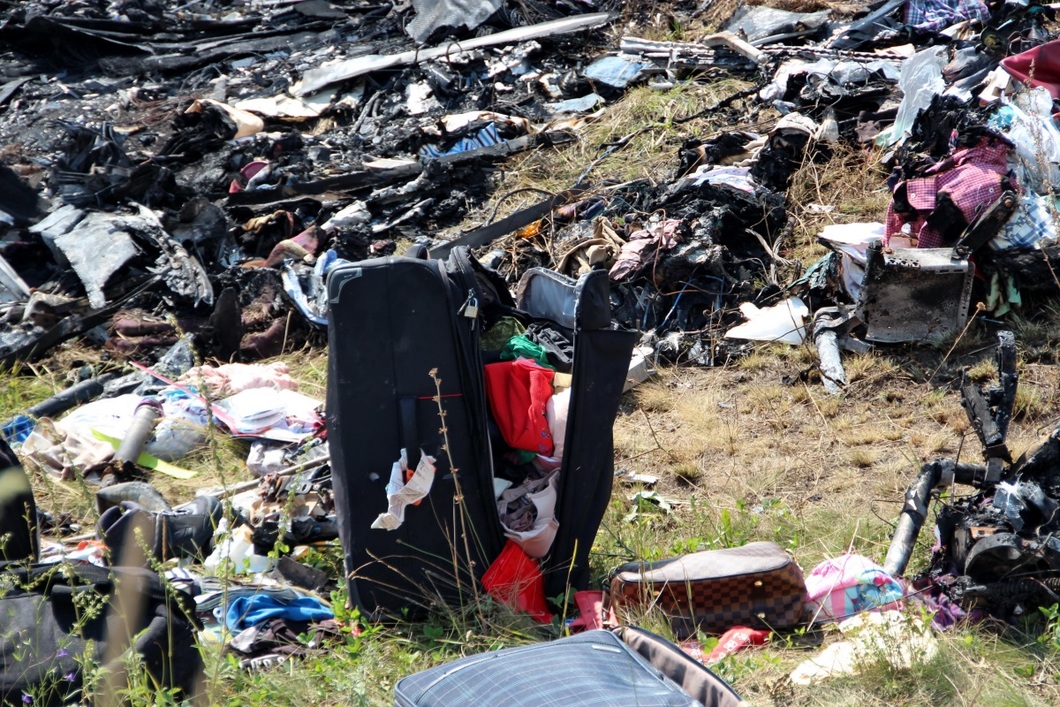 The crash site of the Boeing 777 in the Donetsk region. Photo by ITAR-TASS / Interpress / Alexander Chizhenok

Ivan Evseenko did not go to Millerovo on combat duty, but began serving under contract a few days after the tragedy of MH17 – and now, he has already quit his job. We met with the young man in a shopping center on the outskirts of Kursk. At first, Evseenko thought that Novaya Gazeta correspondents were collectors, and first of all he declared that he had long since settled “all loan issues”. After making sure that we arrived for a different reason, Evseenko felt relief. “Oh, this. Well, that was before I was there,” the man said.

“Nobody believed that we could do this, – we do not even know how to operate a Kamaz [truck], let alone a whole anti-aircraft complex. I still can’t believe this.”

After meeting with Evseenko, Novaya Gazeta went to the officer, currently still a part of the 53rd brigade, Major Ilya Baibakov. According to Novaya Gazeta, the Major manages the food service and took part in the mission to Millerovo. If in the middle of July 2014, the “Buk 332” was actually transferred – for reasons that have yet to be clarified – into the hands of the separatists, then the soldiers accompanying the car would have been supplied with food rations by Baibakov.

The Major lives in the Marshal Zhukov military settlement near Kursk. The home address of the Major can be found in the public domain in the database of court decisions of the Moscow District Military Court (in 2012, the court considered the question of depriving Baibakov of his driving license for driving in the opposite lane). The Kursk address of Baibakov can be checked with other databases available online. However, after arriving at the address, the correspondents of Novaya Gazeta did not find Major Baibakov. A female voice answered us through the intercom that she did not know of Baibakov:

“There is no one like that and never has been. Well, maybe there was one 25 years ago, so no point in looking,” said the voice and laughed.

Another person on the list of the military personnel who went to Millerovo is the Major of the Medical Service of the 53rd Brigade, Irina Kolesnik. She now works at the Kursk clinic of the Ministry of Internal Affairs on Gogol Street. We were able to make an appointment with Kolesnik by phone in advance. Surprisingly, she agreed immediately. The woman did not question our interest, but only said: "I know what brings you here."

During the meeting, Kolesnik wanted to find out how we found out about her and, in particular, about her current place of work: “You cannot hide anything [these days],” she could not hide her surprise. Kolesnik was especially interested in who could send journalists to her and what else “they” know. On the topic of the tragic events of July 2014, the conversation was cut short.

At the end of it, the Major said: “I can’t tell you anything. I have no right to speak about the actions of [the motherland].”

With the participation of Leonid Nikitinsky